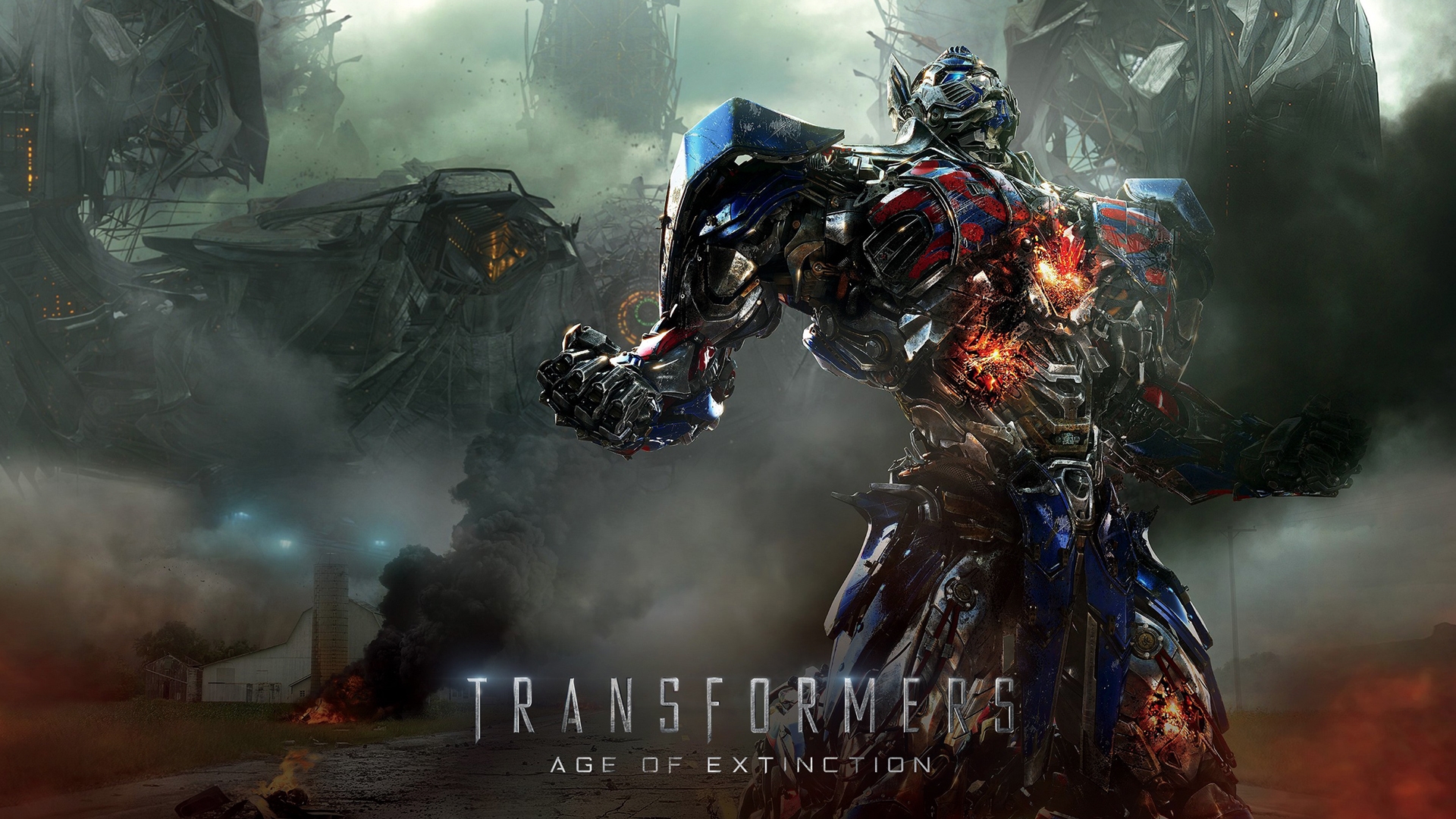 It’s another Michael Bay Transformers film… If that doesn’t turn you away from wanting to see this movie, then continue on.  If you did not enjoy the initial three of Bay’s Transformers films, then you should steer clear.

Released in 2014, Transformers: Age of Extinction fast forwards five years into the future beyond the concluding events that occured in Transformers: Dark of the Moon, and follows the footsteps of a new group of human protagonists, and the surviving Autobots.  The film hints towards the inclusion of Dinobots very early on, and jumps right into the action when we see Lockdown backed by a group of CIA agents hunt down and brutally kill Autobot Ratchet  From here, we jump into the introduction of the main protagonist and, from here on, it was apparent that this film did a better job than previous Transformers’ films of balancing action and plot development.  The original Bay trilogy seemed to struggle finding the balance between the two aforementioned elements due to the pacing feeling off, and the films feeling like more of a task to watch than anything because of the imbalance of little action with far too much plot development in between.  I, personally, feel that Age of Extinction had a significantly better balance of the two, and feeling a little more consistent despite the incredibly long run time of close to three hours.  Continuing on, Cade Yeager (Mark Wahlberg) is an inventor, living in Texas, who is struggling to remain above water financially and is in dire need of an invention to help him get back on his feet.  While himself and his best friend, T.J. Miller (Lucas Flannery) are out searching for some scraps and the like for him to use in his “barn-turned-lab,” he comes across a scrap truck that he ends up purchasing and taking back home with him.  As luck would have it, Cade actually purchased Optimus Prime, who is also a prime target of Lockdown and the CIA in their hunt to kill the remaining Autobots.  Shortly after, they are able to track down Optimus, leaving Yeager, his daughter Tessa (Nicola Peltz), her boyfriend Jack Reynor (Shane Dyson), and T.J. accompanying him in his attempt to escape and regroup with the remaining Autobots.  Not only is Lockdown a problem, but KSI, a company headed by power-hungry Stanley Tucci (Joshua Joyce), was able to find a way to build their own iterations of Transformers with the Transformium material they obtained from deceased Autobots.  So, you’ve got a badass Transformer bounty hunter, Lockdown, and manufactured Transformers, which includes the Megatron replication (Galvatron), all finding a common enemy in the Autobots, and eventually the power associated with elimination of the Autobots and obtaining the superiority associated with the extinction of them.  The biggest complaints about this film all tend to focus on the alterations of the plot between this film and the original, animated Transformers movie.  While all of these complaints are justifiable, and there were a lot of things this movie did that can very strongly be argued as bad ideas in comparison, I think it’s also necessary that you take this film for what it’s worth and realize that it is not a direct remake of the classic Transformers series.  If you can’t look past the fact that this iteration isn’t going to follow a lot of those plot points true to the original, then this really isn’t a film you should watch, because you will find only disappointment and shattered, nostalgic, childhood memories.  Personally, even with the lackluster plot and the alterations of the original plot, I still think this movie is enjoyable enough, and is easily the best out of the four Bay films thus far.

The casting direction in Age of Extinction, to me, is better than the original cast with Sam Witwicky (Shia LaBeouf).  For one, I think Megan Fox, who played Mikaela Banes (Witwicky’s love interest in the first two films) is a tough watch in most of her roles, and even Rosie Huntington-Whiteley, who replaced her role as Witwicky’s lady of interest in Dark of the Moon, felt like they were put in the movie simply for some romantic filler, and ultimately contributed nothing to the plot.  I’m not trying to take away from LaBeouf’s role by any means, but Mark Wahlberg brought a great personality to the film as the main protagonist, and did a good job portraying his role as a struggling inventor who was losing grasp on everything around him, including his daughter.  The least noteworthy of the cast here I think would probably be his daughter.  Not due to a lack of effort from Nicola Peltz, but more or less just her lack of importance in the film.  She does a good job of playing the stereotypical teenage girl, but her importance as damsel in distress later on in the film just felt empty.  Again, she did a good job of playing her role, but her role lacked the weight that it could have had on the plot and her character, in itself, ended up unfortunately holding a similar weight to the lead female roles of the previous three movies.  The consistent tension between her boyfriend, Jack, and Cade adds quite a bit of humor to the story, and remains pretty consistent throughout.  I think Shane Dyson and Mark Wahlberg’s roles in this film really shine, and are a good deal of the reason that this movie felt like a more enjoyable movie than its predecessors.  All of the Autobots and Decepticons feel adequately voiced, with the standouts being John Goodman’s role as Hound and Bumblebee, as always, since his voice is comprised of cuts from different radio segments and songs.  Both of those characters also add a lot of humor to the movie, and more often than not, the scenes with them in it result in some good laughs.  I don’t think any of the antagonists really stood out, unfortunately.  By default, Lockdown and Galvatron had adequate roles, but the human antagonists didn’t hold a candle to the flame that could’ve been.  While I didn’t expect it, I think putting more focus on developing a bigger threat within a human character could, potentially, be the make or break between a decent movie and a good or great movie.  Sadly, Age of Extinction failed to provide that.

The soundtrack, as usual in a Transformers film isn’t full of anything fantastic, but has some mainstream rock included and the stereotypical climactic action film music.  The inclusion of an Imagine Dragons’ song as the theme song for this film is arguably a lot better than the incredibly lackluster Linkin Park songs from the previous films.  If anything, I think it’s noteworthy to say that the decision to stray away from Linkin Park was a good one, as their steady declining product as a band would’ve likely just hindered the already negatively-biased opinions on the film from naysayers.  There’s not too much more to say regarding the soundtrack.  It wasn’t anything too special, but there’s some decent listens in there for fans of mainstream rock.

The effects really do shine with Age of Extinction.  There’s a lot of awesome CGI, and it looks really good given the chaotic action that is consistent throughout the film.  You can tell they put the budget in the right places because there is a sense of realism with the destruction that is often undershot with action movies like this.  The destruction looks fluid, and there aren’t any noticeable flaws that come to mind where there are graphical hiccups.  The effects are this movie’s biggest stronghold, but explosions and CGI have become Bay’s forte, so I wouldn’t expect any less.

On the surface, you know some insane explosions, over-the-top action, and a stale-to-mediocre plot have become uniform for a Michael Bay film.  Transformers: Age of Extinction shines as arguably the best Michael Bay product in comparison to his recent efforts, but it is still quite flawed, and certainly won’t be winning any awards.  It is quite a fun watch. Equipped with a solid cast, and the aforementioned elements, Age of Extinction is still worth checking out, but likely won’t offer any redemption for any naysayers of its Bay-helmed predecessors.  I do recommend checking this movie out if you’re in the need for a somewhat mindless action film, and you enjoy over the top action. It’s not going to blow your mind, but if you can see past the “Hater-ade” that the majority has been sipping on, it’s a fun watch. 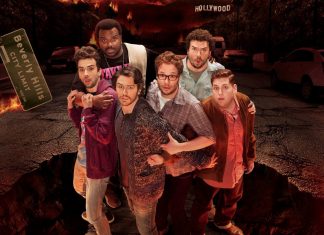 outbreak - October 20, 2013
0
While attending a party at James Franco's house, Seth Rogen, Jay Baruchel and many other celebrities are faced with the apocalypse.