2019 has been a really great year for Nintendo.  They’ve been killing it in sales and releases, and the release slate for the remainder of the year still has some heavy hitters lined up in Pokemon Sword & Shield and Luigi’s Mansion 3; to name a couple.  The Legend of Zelda: Link’s Awakening is a complete remake of the 1993 Game Boy hit of the same name. I recall playing the original Link’s Awakening in my earliest gaming days. However, considering the title released a month before I was born (June 1993) and the updated Link’s Awakening DX for Game Boy Color in 1998, I was a bit too young to enjoy or appreciate the title in full fashion.  I also, admittedly, did not complete the original Link’s Awakening, so if that’s worth burning me at the stakes for, then light em up.

Link’s Awakening takes place following the events of A Link to the Past.  Link has washed up on the shores of Koholint Island and is informed that he must awaken the Guardian of Koholint, The Wind Fish, before he can depart.  Naturally, when you have to pull off a seemingly simple task in the video game work, there are multiple, additional obstacles you have to overcome. In this instance, waking The Wind Fish requires that Link trudge through 8 dungeons to obtain the 8 instruments necessary to awaken it.

The Gameplay in Link’s Awakening follows a more classic Zelda design, with a top-down perspective.  However, in this remake there are more modern elements incorporated as well such as the ability to move freely with the analog instead of being limited to the 4 directional limitations of a D-Pad.  You also have more buttons available for use, unlike the Game Boy and Game Boy Color’s 2 button limitations. It was a bit disappointing, however, that some of the more frequently used abilities such as jumping cannot be mapped to one of the shoulder buttons, etc.  The addition of 3D models and environments makes a significant difference to the original experience, allowing Link to jump and interact with the environments in a more immersive fashion. Like most Zelda titles, as you progress through the game you will discover new items and pick up new abilities, allowing Link to overcome more complex puzzles and enemies.  Once you have multiple abilities unlocked, it becomes more important to focus on hints and dialogue that you get from the NPCs and Owl statues that are littered throughout dungeons. Many of these will allude to what item or ability you may need to equip to defeat a certain enemy type, or how to overcome obstacles.

Link’s Awakening, while not incredibly lengthy, has a number of mini games and side quests you can interact with in the game to pad out the entertainment and the run-time.  For size, my run with the story lasted about 8-9 hours. I did not get to 100% completion, am not a dungeon-crawling expert (I may have checked out a walkthrough at a couple points), and I will likely spend a couple more hours with the game to get the remainder of the hidden items, etc that I haven’t found yet. One of my favorite side-experiences in the game was the crane machine mini-game that is worth revisiting between dungeons to see what else may be available to win.  Hidden rooms, items, and even a hidden dungeon are littered throughout the game, adding hours to the gameplay experience for those who are completionists. Link’s Awakening has a slew of NPCs that you can encounter throughout Koholint Island, and many of them have distinct personalities. Many of which offer some good chuckles throughout the game. Another addition to this remake is Dampe’s Shack, which offers a dungeon-building experience that should offer some good fun for those that have been longing for a ‘Zelda Maker’ type of game.  This experience is far more limiting than what you’d find in the likes of Super Mario Maker, but I think this was moreso a way to test the waters for a possible full-release Zelda Maker (fingers crossed, y’all). Also, I think this was a way to pack in a meatier experience with the game, since this is a remake of a 25-year-old handheld title, after all. Dampe’s Shack wasn’t really my cup of tea, but I got more than enough enjoyment out of the main game and I consider it more-so a bonus rather than an integral part of the game. For me, since it didn’t fully grab me, I had no problem leaving it alone and don’t feel like I didn’t get enough value out of the game without enjoying it.  Only minor points off there. The world of Koholint Island isn’t gigantic, especially not in comparison to today’s standards, but there are reasons why the game still holds up and why Nintendo justified a full remake of it.

The Legend of Zelda: Link’s Awakening is one of the most visually appealing games on the Nintendo Switch.  Not because it breaks any new ground in regards to graphics, but because it is so incredibly vibrant and both the character models and environments look and interact in a fashion that is often adorable and always pretty. Also, there are cutscenes at certain points in the game that are done in a very late 80s-90s anime fashion, and they are just as awesome as they are fitting for the source material. However, the performance is unfortunately another story.  I played the game both Docked and Handheld on my Switch, and I ran into the same slowdown issues with both. There are many moments where the game slows down and drops frames considerably; almost always triggered by entering/exiting buildings/dungeons, changing settings from town-to-town, etc. The game never came to a complete freeze nor did it have a legitimate impact on my enjoyment of the game, but it was frequent and blatant enough that it was something that became quite a nuisance over the course of my time with the game.  When following coverage of demos from back at E3 2019, I recall reading from multiple outlets that this was a problem back then, so it is a bummer that this was not resolved before launch.

The Legend Of Zelda franchise is widely known across the gaming community for its memorable tunes and sounds from over the years.  This game is no exception. Link’s Awakening has outstanding sound design and boasts quite a few jingles that are worth humming along to.  Some sounds you will definitely recognize from other games in the franchise and those specific to this title are enjoyable all the same. The sound affects are solid as well.  Everything from sword slashes to explosions sound as they should, and the sounds that NPCs and enemies make feel right at home as well.

The Nintendo Switch remake of The Legend Of Zelda: Link’s Awakening is truly awesome.  My time with Link’s Awakening has been some of the best fun I’ve had gaming in 2019, and I think Link’s Awakening will be on my list of contender’s for Game of the Year.  Only held back by the moments of slowdown, Link’s Awakening has enough positive to bring to the table that it’s easy to overlook the frame drops in exchange for the immersion in the beautiful setting of Koholint Island.  This very well done remake offers a story experience that should be just as enjoyable for long-time fans and newcomers alike, and has quite a bit of additional content to offer for the completionists who want to traverse every nook and cranny the game has to offer.  Link’s Awakening is a must-have title for anybody who owns a Switch, and especially anybody who enjoys the classic Zelda format. 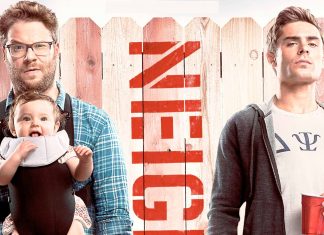 Ryan Atkinson - October 24, 2014
0
After they are forced to live next to a fraternity house, a couple with a newborn baby do whatever they can to take them down.