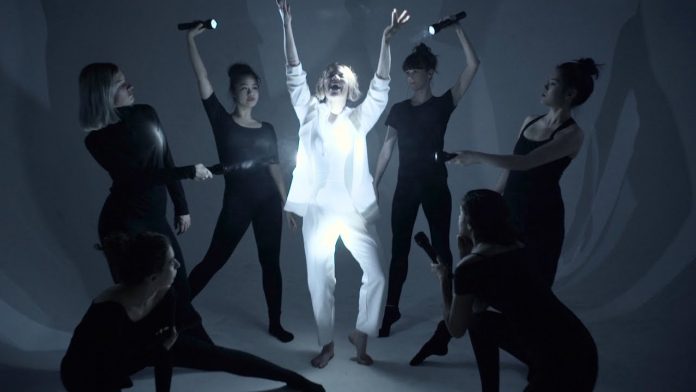 Alicia Walter’s move from Chicago to Brooklyn naturally transitioned Oshwa from a band to a solo project. Walter, who studied composition in college, was already handling a majority of the songwriting, which deviated between the more experimental, math rock focus of Chamomile Crush and the more-accessible (but still weird) orchestral pop sound found on I We You Me.

Now, Oshwa is back with a new song that showcases another shift in sound. It’s hard to describe exactly what you’re hearing on “Off You Go”, though Walter and other outlets have described it as art pop, so I guess we’ll go with that.

Much of the song is a synth loop with occasional noise thrown in. Walter’s voice is definitely the focal point, and I’ll be honest – it has a unique timbre and I wouldn’t be surprised if many people don’t care for it. The minimalist approach is odd, and those there is some progression and additional layers that are added in, there’s not a ton going on musically. There’s plenty of variety vocally, though. The lyrics straddle the threshold of levity, with lines like “I can feel it on my hand / making me say ‘ow'”, which does make it a bit hard to take that part seriously.

Overall, I’m curious how this new direction will play out. Walter explained the new direction allows her to explore choreography a bit more, which I’m sure will make for more interesting, if not unconventional, live performances. Check out the track and music video below.