After quite a few years of inconsistency and lackluster releases, I’m happy to say that Resident Evil is back!  Resident Evil VII: Biohazard is the 7th main entry into the series, but if you consider the movies and games that are not numbered-entries, there’s a much larger spectrum of content, tainted with disappointments.  Lately, there’s been an influx of horror games coming out, and it’s clear that the RE team at Capcom drew inspiration from many of these, as well as horror film franchises.  However, I can’t discredit them for the clear pieces of inspiration since many of the aforementioned games may have never existed if it weren’t for the original Resident Evil trilogy practically building the Survival/Horror genre from the ground up, and even coining the term.

Resident Evil: Biohazard follows the footsteps of Ethan who is looking for his wife, Mia, after receiving a video from her telling him to “Stay away!”  Naturally, he made the decision to go, all by himself, to try and find his wife who has been missing for a while.  Why would anybody bring a ‘+1’ with them to go to a deserted house and find someone who is clearly in distress?  Anyways, Ethan is searching for his wife in the Baker’s house in Louisiana.  The Bakers are a slightly dysfunctional, overbearingly insane family who welcomes you to the family with a right hook to the face and wants to murder you when you don’t commit the crime of cannibalism by eating the lovely dinner they made you.  Doesn’t seem too far off from any family I’ve ever met.  Ethan finds himself trying to keep his ass alive and save Mia in the process by finding an antidote for this unknown infection that she has.  Just like most of the other titles in the Resident Evil franchise, Resident Evil VII puts you through many trials as you try to ultimately find a small number of items.  You have to do puzzles to get to boss battles which then reward you with one of the items you need.  Mind you, you will have a damn good time doing this, but this formula is rinse and repeat like games of Resident Evil’s past.  The game took me roughly 8 hours to beat the first time around on Normal, and I am currently working on my second playthrough where I am searching for hidden items and the like.  There is an achievement for completing the game in under 4 hours, which is certainly possible, but the first time around, having the puzzles unbeknownst to you is a treat.  I would knock this game for being short, but there’s a lot to find and discover in this game, there’s an unlockable difficulty called Madhouse, and you can also unlock Unlimited ammo, which is a staple of the RE franchise.

While Ethan (Todd Soley) is, mostly, a pretty forgettable protagonist, the antagonists we get from the Baker Family just might be my favorite enemies of any Resident Evil game thus far.  Jack (Jack Brand) is absolutely bonkers and is one of the craziest dudes I can recall ever fighting in a video game.  He is batshit crazy and offers a good bit of fun and fear as you encounter him over the course of the game.  Marguerite Baker (Sara Coates) doesn’t have a very large role but offers easily the greatest boss encounter in the game, and one of the best boss battles in recent memory.  Her character, despite her minimal role, is one you will recall back to.  The other supporting characters are well casted, and it’s almost certain this game would not have had the shimmer it does if it weren’t for the characters being brought to life both by the plot and by their respective voice actors.

The sound and music in Resident Evil: Biohazard is stellar.  The game is creepy enough as it is, but the top notch sound design in the game really encapsulates you within the environment.  Being the first horror title to be released by an established publisher for VR, this game really had to uphold to some high expectations to leave a lasting impression.  While I haven’t had the opportunity to play this game in VR, my experience in a dark room with surround-sound headphones captured the mood in similar fashion, and there were few instances where my heart wasn’t racing and I wasn’t bracing myself for that next scare.  Even the sounds of the weapons in the game sound solid.  In more recent Resident Evil titles, the sound quality fell to the wayside since these games were more focused on big set pieces and far more action than horror.  With Biohazard going back to the roots that this series was built on, the sound quality has taken a turn for the best and really delivers, like the rest of the aspects of the game.

One of my least favorite things about being a games journalist is having to be critical about graphics.  Good graphics do not make a good game, but I fully understand that expectations need to be set and developers need to be held accountable for them.  I think the weakest link with Resident Evil: Biohazard is the graphics.  Before you jump to conclusions, the graphics are solid, and Capcom made a really clever move by setting almost the entire game in the dark so textures and visuals can be more easily overlooked, but if you take the time to look around and focus on the game, you’ll see that some corners were cut with the visuals.  In the few lighted parts of the game, you will find some stuff that looks pretty dated, graphically, which can be upsetting considering that the size of the map in this game isn’t that massive.  I’m talking about specific pieces and not the overall aesthetic, because there are some objects in this game that are made to be gag-inducing, but rather just look dull and don’t deliver in the sense that I believe the developers intended.  Most namely, the three or four faceless enemies that you take on outside of boss battles.  These enemies were tough to face, especially when confronted by more than one at a time, but they didn’t look even slightly alarming and felt more like they belonged as Putties in the Power Rangers reboot.  On the flip side, all of the main characters look amazing, and most of the boss designs are beautifully gruesome in design.

Resident Evil 7: Biohazard is easily one of the best titles the franchise has seen, and definitely the entry I’ve enjoyed the most since Resident Evil 5 (look it up, there’s been a lot of RE games since then).  In a triumphant return to the Survival/Horror roots that the franchise was built on, this game came out swinging and hit almost every nail on the head it intended to.  This is very clearly a love letter to the fans of the Survival/Horror side of Resident Evil, but as a game that boasts solid, first-person combat and some really awesome boss battles, I’d say this would be a good time for fans of titles post-Resident Evil 4 as well.  Resident Evil: Biohazard is a must-play for fans of the series and newcomers alike. 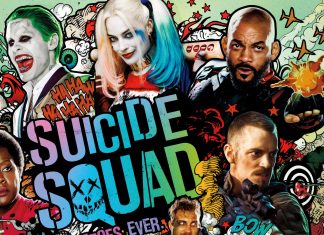 outbreak - August 5, 2016
0
A secret government agency recruits some of the most dangerous incarcerated super-villains to form a defensive task force.