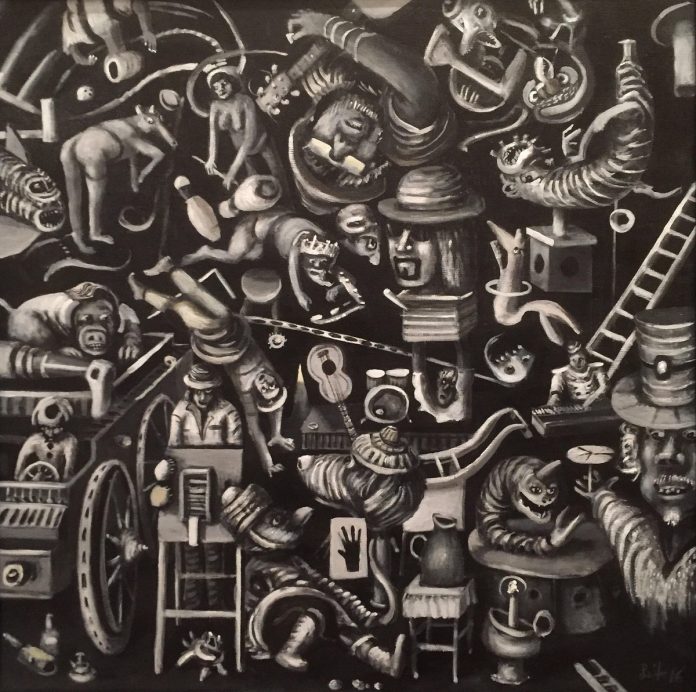 The narrative nature of Redshift Headlights‘ debut LP, “Inside Voices” makes it obvious that Stephen McCabe is not content with the lyrical status quo. McCabe, an English instructor at the University of Wisconsin – Oshkosh, also manages to shatter the perception that academia is a heartless, cold bubble that prevents its residents from partaking in other pursuits.

Over the course of ten songs, McCabe explores the unique perspectives of ten Americans living in ten different periods of time. Underlying these lyrics sits a firm bed of baroque pop and progressive rock, much of which multi-instrumentalist McCabe achieves live during solo sets through the use of live looping. Nonetheless, that didn’t stop him from inviting guests to help with the album – there are full orchestral arrangements, including both strings and brass, strewn throughout the collection. Add in guitar effects and synths and the result is an album with a full sound that somehow refrains from being overly-cluttered.

Lyrically, there’s a mix of light-hearted moments and serious ponderings. Whereas “What This Heart Is For” touches on school-aged infatuation, “Now We’re Nobody” and “Under This Carpeting” recount the transience of renown and the reality of death. The lyrics ultimately serve as short stories to explore concepts of identity in an evolving American society. It’s unique with its objective look at pseudo-history, being neither needlessly nationalist nor overly-salty.

Unfortunately, the album showcases a similar tepid feeling seen on comparable release like San Fermin’s “Belong” and Yes We Mystic’s “Forgiver”. While the lyrical approach and instrumentation is admirable, the end result is a collection that high obvious high and low points. While Adjy manages to make full use of their auxiliary instrumentation, there is still a common core in their songs. Sadly, there’s a bit too much variety that either lacks cohesion or feels unnecessary. The lyrics are ultimately accessible and handled with care, but due to the fictional nature, they lack emotional impact.

Overall, “Inside Voices” is a strong and ambitious debut. I’m not going to overlook its strengths by any means. If you’re interested in an album that reads like a novel and has a guitar tone from the recent past, you’ll likely feel at home. At worst, you’ll find an album fraught with artistic vision.