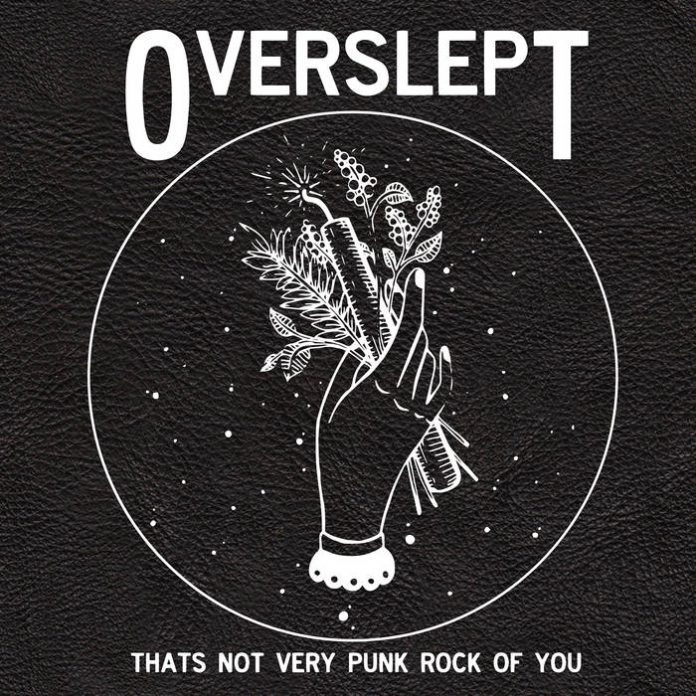 Denver’s Overslept has returned with a new EP that mostly lives up to its title by exchanging layered guitar riffs and and full-band instrumentation with a good share of groove, sultry vocals, and contemplative lyrics over a largely-acoustic backbone. As a follow up to 2015’s I’ve Been Keeping to Myself, That’s Not Very Punk Rock of You is an acceptable stepping stone between full-lengths and even serves as a nod to the band’s earliest material (when it was a solo project).

“Thanks for Everything” starts the seventeen-minute adventure off with a subdued mix of acoustic guitar, strings, and vulnerable lyrics like “I know most of what I say sounds like fortune cookie poetry but the weight remains the same”. The entrance of drumming quickly changes the dynamic, as the other instruments also build to consume the space that sat in the background of the intro. Frontman Elias Armao has one of the most interesting voices in the genre, reminiscent a bit of The Dear Hunter, albeit with a smooth, jazzy texture. The song ends with overlapping vocal lines.

The second track, “Troublemaker”, further embraces the timbre of Armao’s voice, opening with plenty of mainstream appeal. Strings again are added to the mix. However, the chorus is the turning point, with tight drumming and percussion overlayed by crunchy, punctuated guitar that work to make it one of the strongest sections of the EP. The next verse follows the pattern of “Thanks for Everything”, with fuller instrumentation. The ending feigns a bit of the ambience found on I’ve Been Keeping to Myself, though it’s not entirely achieved due to the sparse, mostly-acoustic instrumentation.

“Kodiak” is an interesting penultimate track, opening again with a sparse instrumentation. This time, however, it feels akin to a folk song. There are no strings here; instead, the song stays laid-back, adding in layered vocals at times. Though the track is over three minutes long, it feels like it’s over very quickly.

The EP closes on “All In Good Timing”, a track that revives the sound found on I’ve Been Keeping to Myself. Naturally, this means the electric guitars are out in true fashion, along with math-rock styled riffs and palm-muted choruses that are remain accessible but certainly showcase the band’s ability. It’s a high-energy track, but the ending feels abrupt.

Overall, the EP is lacking – not necessarily in skill but in execution. Again, the songs have great hooks. However, it’s the sound from I’ve Been Keeping to Myself that really makes full use of the whole band and has the strongest emotional impact. This set of songs lacks much of that strength, apart from “All In Good Timing”. Ultimately, That’s Not Very Punk Rock of You is a welcome break of silence but I’m confident I’ll enjoy the next release a bit more.

That’s Not Very Punk Rock Of You by Overslept