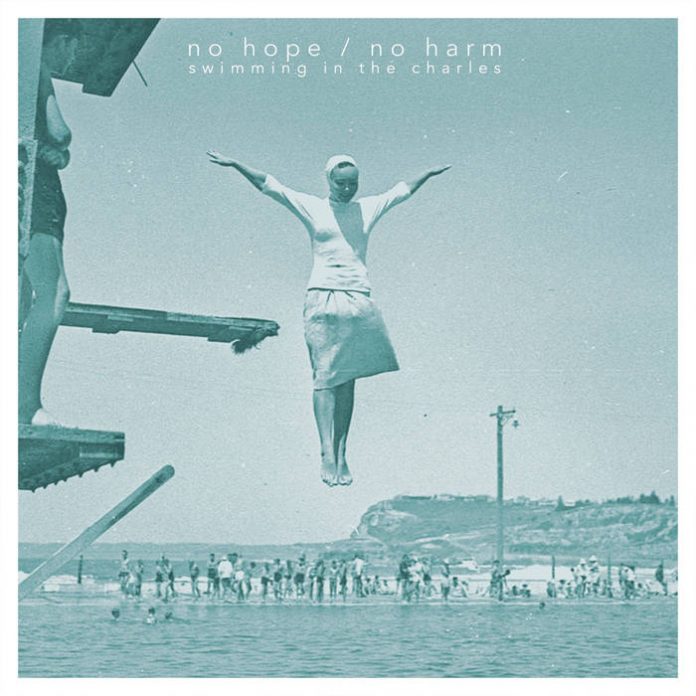 Boston’s no hope/no harm can only be described as hidden gem – their combination of emo guitars, new-wavish baritone vocals, and occasional lyric wit coalesce across the six track of their new EP, “Swimming in the Charles”.

Toxic Baby kicks things off and speaks of a volatile relationship. Lyrics like “You loved me like a jihadist” will certainly have listeners doing a double-take. Boston’s central river, the Charles, is used as a metaphor here for the pain often endure willingly to be in love. Despite a somewhat dark undertone, the track is fairly upbeat and fun. Synths are paired with an anthemic chorus for a great first taste of the group’s abilities.

The energy continues on the hazy I Know That You Don’t Care. The subject again rests upon relational disfunction, though the tone of the track here has a bit of a retro emo/alternative feeling to it. The whole composition flows very well, making this another staple of the EP.

Punch a Nazi in the Face changes gears to tackle politics a bit, though it’s handled in a very casual manner. This time, the characters in the story attend a protest but come to the realization that perhaps their peaceful approach isn’t enough to facilitate change and a fight ensues. Musically, there’s plenty more alternative influence; it’s an interesting juxtaposition against the lyrics, lending itself toward a narrative of tired memories.

Pony Boy is easily my favorite track of the album. It’s a pretty simple song musically, but it carries a fair amount of emotional weight. It’s undeniably catchy, and I’ve had it on repeat for a bit.

The lyrically-sparse Our Vile Body is the penultimate track of the EP and is slow and moody to suit.

This Living Wage closes off the EP, and it’s definitely a strong finish. It’s the first song I heard from the group, and it certainly wasn’t a bad starting point. The alternating vocals are a nice touch, and the down-to-earth lyrics round off the EP.

Ultimately, this is one of the strongest releases I’ve heard in a while. no hope/no harm manage to tackle the emo genre without the clichés of mathy technicality; instead, the core is simply honest songwriting that borrows from new wave and alternative influences for a conglomeration of sounds that is refreshing.