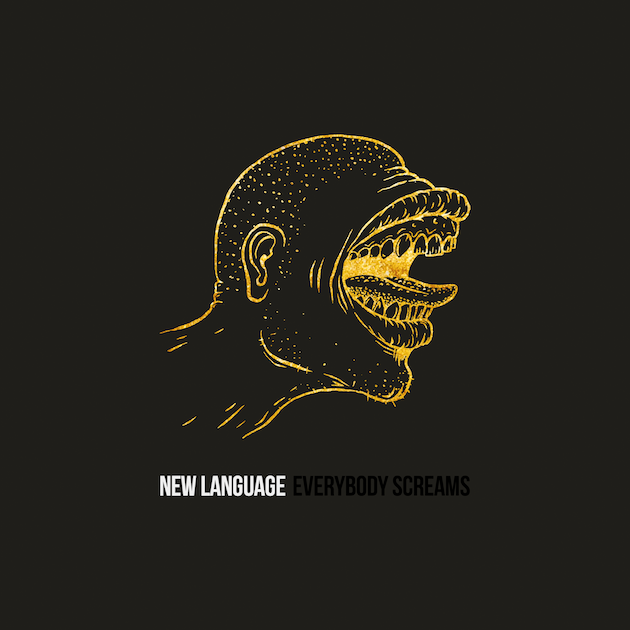 It’s rare that I come across a band I struggle to associate with a subgenre, but New Language is one such band. They’re a hard-working rock band from LA that blends a mix of raw aggression with catchy choruses. I wouldn’t say they’re punk – they exist in some odd space between The Foo Fighters and ’68. Perhaps alternative metal would be appropriate, though I fear its connotations toward radio rock bands like Breaking Benjamin may leave the wrong impression.

After releasing their first full-length “Come Alive” earlier this year, the band has already followed up with a new EP that carries the same fervor, politically-charged lyrics, and musical goodness that was showcased on the full-length. I would argue that “Everybody Screams” even builds upon these elements. Perhaps it’s largely preference, but I enjoy some of the more melodic moments on the EP and there were a few songs on “Come Alive” that despite being strong musically, lost replay value a bit too quickly.

“Everybody Screams” opens with its title track, whose lyrics set the tone for the EP: “What’d ya do that’s so different different, touting a nobel cause? It’s the same for the others following a different call.” The totality of the lyrics is this: Everyone seems to spend more time focused on their own views that they would rather sew division than listen to each other and seek mutual understanding. The guitars are dirty and heavy, but it’s balanced out by clean vocals and a catchy chorus.

Show Me is a bit more alternative, opting for an intro with delicate drumming and finely-picked guitar melodies that are quickly contrasted with more abrasive passages. It’s akin to tracks like Wake Up off “Come Alive”, if not a bit more experimental. The riffs aren’t overly-complex, but they’re certainly strong and fit the genre.

If Show Me is on the ’68 side of the spectrum I mentioned earlier, Out of My Head falls on the Foo Fighters end. It’s arguably the most radio-friendly track (assuming we’re talking about alt radio, not Top 40s). It’d probably also feel at home on a Tony Hawk or SSX soundtrack. Lyrics seem to deal with choosing not to think about things that make us uncomfortable – whether it’s a deeper issue in general or an opposing viewpoint.

The EP closes on Area Code, a song that reminds me a bit of “Silent Alarm”-era Bloc Party. This is most evidenced by the chorus, which is equal parts gritty and catchy. “They’re selling tickets to be someone else,” vocalist Tyler Demorest exclaims. This seems like a jab at consumerism culture, though I can’t say for sure. Regardless of the exact meaning, it’s a high-energy track with what I’d argue is the best drumming on the EP.

New Language is certainly one of my favorite new bands of the year, and “Everybody Screams” has only solidified this opinion. Area Code and Everybody Screams are primed for mass appeal. Show Me is a nice addition for fans of heavier music. Last but not least, Out of My Head definitely deserves a place on a soundtrack.