There are about as many zombie films on the market today as there are romantic comedies or metal re-imaginings of pop songs.  Maggie, however, intrigued me when I initially saw the trailer because it appeared that the story wasn’t about an outbreak, but rather the transformation of one individual.

Maggie, a 2015 post-apocalyptic zombie film, mostly takes place at the home of the title character and her family.  Maggie (Abigail Breslin) was bitten by a carrier of the Necroambulist virus which, you guessed it, turns humans into zombies.  She is taken to a quarantine zone until her father (Arnold Shwarzenegger) comes and takes her back home to be with her siblings and stepmother for the time being.  The government allows carriers to remain out of the quarantine zone until the infection becomes dominant in the carrier’s body.  The whole film continues to follow her path to transformation and is both sad and enjoyable to watch.  The unique approach to the zombie genre that is very seldom focused on is the transformation, and this movie is built entirely around it.  The zombies in this movie take weeks to turn, which is also something that is not common amongst other films of this nature.  I really think the plot of this movie was both unique and great, and the execution of the plot was no different.  This movie is not a horror film, so do not go in expecting to jump, or even be on the edge of your seat.  This movie treats the zombie virus as somewhat of a cancer and more-so just focuses on the emotional transformation that the family, friends, and victim go through as one travels down the path from the living to the undead.

The directorial approach of this movie was my biggest gripe about it.  There were often times where the camera movement and placement just felt off, and a little out of place.  The angles and positioning at points cut off parts of the characters and ultimately appear like they should’ve been zoomed out a bit further to better capture the scenes.  These gripes do not take much away from the film, but it just makes the movie feel like it was filmed by an indie filmmaker.

The small amount of makeup and effects used in this movie really helped bring it to life.  I really loved the way they made the bodies look during and after transformation.  Also, despite the PG-13 rating, the movie didn’t seem like it cut any corners in terms of the minor action and any blood that is shown.  This is something a lot of movies of this nature seem to fail at, and Maggie executes it very well.  The characters look, feel, and sound real, which can be both credited to the solid cast and the good use of effects.

As mentioned, the cast in this film was good.  Abigail Breslin does a very good job in her role as Maggie, and I think Schwarzenegger’s role as her father is one of his best.  The supporting roles from her stepmother and siblings are passable, and the only real fall here were some of Maggie’s friends; who play brief roles in the film.  Maggie and her friends are all teenagers, so I’m sure part of the reasoning behind their annoying roles were an attempt at capturing how people their age would act, but the majority of the screen-time from her friends is borderline annoying.

The 2015 movie, Maggie, had some ups and downs.  Overall, it’s a great spin on the over-cumbered zombie genre of films, and it’s backed by a well developed and enjoyable plot.  The acting is great by the major roles, but has some shortcomings within some of the supporting cast; most notably Maggie’s teenage friends.  The cinematography has some misses but doesn’t harm the experience a great deal.  The effects, realism, and sounds are all very well choreographed, and this film captures the emotions and actions very well thanks to that.  Maggie isn’t a must-see film, but it’s certainly an enjoyable watch. 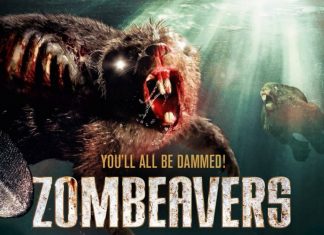 Ryan Atkinson - November 8, 2014
0
A fun weekend turns into madness and horror for a bunch of groupies looking for fun in a beaver infested swamp.