Well known Jackass comedian Johnny Knoxville coupled with writers Spike Jonze, Jeff Tremaine, Fax Har, and Adam Small continue to ride upon the wave of successful crude humor of their previous works along with the unknowing reactions of hidden camera pranks. Take those elements while mixing in an adventurous story to be loosely followed, and you have Bad Grandpa. Which with all things considered seems to be a fairly fresh take on the comedy genre.

Knoxville looks and plays the main role of being a senior-aged man named Irving Zisman. A lot of credit is rightfully due to his makeup artists to unquestionably fashion Johnny to appear a few decades older than he actually is. But, if one were to take away such a disguise from Knoxville, there’d be a torrent of implications to this film. Not only would it be downright creepy to see a man in his 40’s get his schlong stuck in a vending machine; Johnny ultimately would have been recognized by the public eye. Most of the world knows a Jackass when they see one, therefore letting the Bad Grandpa cast uses this blank slate completely to their advantage.

Irving is accompanied by a young boy named Billy (Jackson Nicoll) throughout most of the movie. Together the grandfather/grandson duo really set the stage for the other actor to capitalize upon shock-factor reactions from unsuspecting public folk. Some of the reactions are over the top and priceless key pieces to the production as a whole, while others are considerably dull. I’m not too sure if this is due to filming location or just the groups of people that happened to be there at the time. I feel as if a small handful of scenes could have used better feedback, whilst some could have been done without completely. How much exactly is scripted and what is pure improv by the actors is unknown, but they both do a great job working with what they were given both solo and as a unit.

The soundtrack used for Bad Grandpa brought in a few laughs by itself. From a track by Midi Mafia down to Cherry Pie by Warrant, you can only imagine how it all fits in. The writers incorporated the soundtrack seamlessly into the total package without skipping a beat. The actors and the public alike involved in the pranks queued right in on time on all types of musical genres. There’s something for everyone in that aspect.

Jackass Presents: Bad Grandpa was absolutely side-splitting at times. Some audiences may find a few of the pranks tasteless or offensive. But, I can almost guarantee a few chuckles from all walks of life, unless you’re Ellie on the inside (dead). I would not recommend this film to the younger crowd due to the explicit nature. Hell, just to make a point — Jackson Nicoll is probably scarred for life for playing the main role. It is worth a watch if you want a few hard laughs, but I wouldn’t expect any more than that. 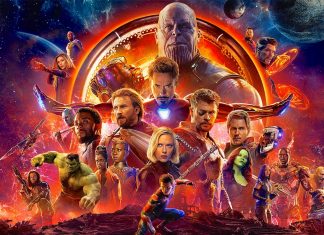 outbreak - May 28, 2018
0
Marvel Studios’ Marvel Cinematic Universe (or, more commonly, the MCU) has been gaining steam over the last 10 years since it all began with...