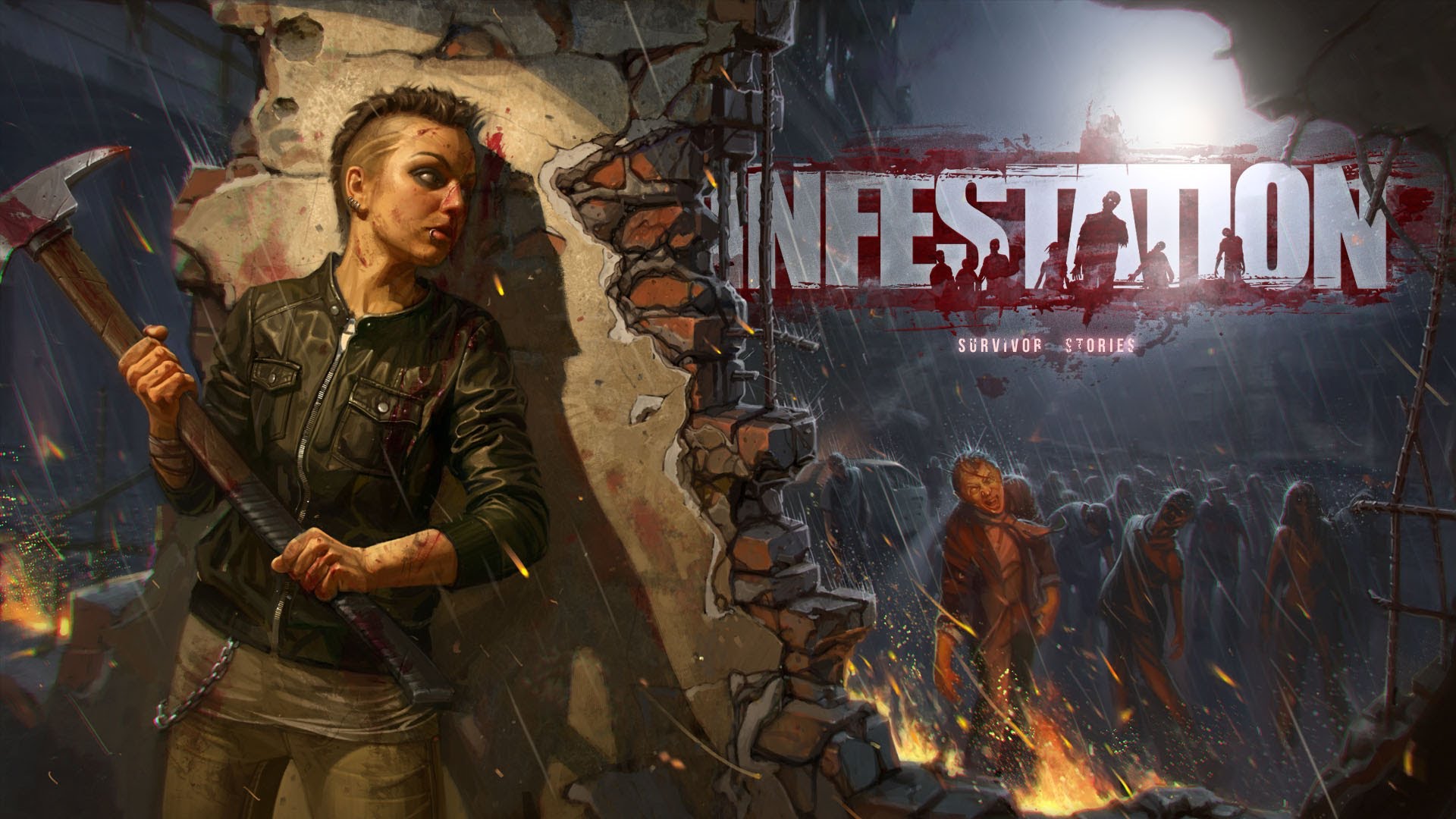 Infestation: Survivor Stories is a Zombie Survival MMO that takes place within the Colorado region of the US of A. Players have to scourge the fairly huge 10km playable map in search of necessities to survive. Said items include, but aren’t limited to, food, drink, and big ol’ 50 caliber weapons. Not only do you have to watch out for buggy zombies with flawed hit-boxes, but even more so other players who tend to have a “shoot first, ask later” policy. Something I would say the community doesn’t have a leg up over compared to rival DayZ… sometimes.

I:SS was previously known, and still widely referred to as The War Z. The name change came in mid-2013 as a preventative legal matter regarding the movie and book World War Z as it could result in confusion, being that it’s “similarly titled property”. The game itself has been released for a couple of years now, with the official release date being October of 2012. Development has been by Hammerpoint Interactive/OP Productions with Sergey Titov at the helm, who only has public recognition with Big Rigs: Over the Road Racing as a programmer. Which from what I can tell gets a whopping Tusk out of 10 from many other well-trusted reviewers.

Players are offered a wide variety of melee weapons to bash skulls with such as bats, canoe paddles, flashlights, to power drills, and many, many more. Then for when you are in desperate need of some more pew-pew, don’t fear. The selection of available firearms does not disappoint with 22 plinkers to death-star sized magnum handguns lingering around. One thing is for sure; there’s plenty of choices. You may even find yourself debating on dropping weapons in order to swap for a better one if space becomes an issue. But how do you tell the difference you may ask. Well, each weapon is classified by their grade. There are lower tier common civilian weapons and higher tier military grade weapons. This affects spawn locations, drop rates, and of course gun stats. Take for example a simple yet effective M16, it’s a civvy weapon that literally spawns everywhere. However, the heavier machine guns and high powered snipers are military grade and are generally only found at the base camps and the main airport. This creates a lot of risk versus reward scenarios for group play, at least on paper.

Character models are unoriginal regurgitated clones from War Inc. Battle Zone. Luckily, the customization has been improved ever so slightly since the early days; still nothing mind blowing or award winning. Upon character creation, you have a small handful of base models to choose from. The head, shirt, and pants can be cycled through for different styles. But that about wraps it up when you want unique facial features, weight, hair, and other personable things. The rest of the customization comes from in-game items such as pink cowboy hats, vests, and even fuzzy teddy bear backpacks. Whoo-hoo.

Vehicles are the greatest thing to come to this game since packaged powdered donuts. Trekking a 10k square map isn’t the fastest or most fun thing! But like a majority of the features in this game, they’re broke. They cause huge lag spikes upon proximity entry which detracts from the natural feel when playing. Vehicles also have problems with players finding an entry point. Sometimes the distance required for the action button to appear may differ, as an item in hand may affect entry, or maybe the Sun, the moon, and Jupiter happen to be in the right alignment. As a passenger, expect screen tearing, reaction delays, and sometimes even fender benders that don’t occur to the driver. Let’s not leave out the fact that the vehicle can sometimes launch you halfway across the map upon exit. Get your sh*t together OP.

The zombies which are supposed to be the cornerstone of the game seem to be quite literally broke. Not only is there the aforementioned oddly placed hitbox issues, and jank pathfinding, but some drop a big heaping cash pile of $0. Must be real Brazilian Reals… I:SS does probably have one of the better zombies systems yet in this genre, meaning it’s probably the least broken. You can get a grip on the mechanics of them fairly quickly and be a Z killing machine in no time flat. But, I can’t say it makes me want to play the game solely for Z killing.

Es Brazil? While I have absolutely no vendettas against Brazil or it’s people, I do deeply — like the endless black hole from the movie 300 deep — despite a good chunk of the eastern South American population that are script-kiddies in this game. Russia, don’t worry, you’re not too far behind. My guess is that they get their jollies from being part of some underground black market ring hustling virtual guns. As you can tell, the amount of hackers in this game is beyond imaginable. Seriously, I wouldn’t be surprised if this is some national past time for when soccer isn’t in season. Every few minutes you are guaranteed to see a name banned by the FairFight system over global chat. The only thing to successfully curb some of the exploitation was PunkBuster. But now, it only seems to punk itself as that defense seemed impenetrable for only about a week. This alone should have made the game Brazilian Infestation: Hacker Stories. It’s been a cat and mouse game since day 1, with the Brazilian mice having the upper hand 9.9 times out of 10. VIVA LA SKILLED PLAYER! To add insult to injury, there’s a lot of false positive readings due to sh*tty development in general. If you walk down a mountain the wrong way and start to do the electric slide; expect a kick for flying. If you are waiting any length of time; expect a “heartbeat” stop and a main menu confrontation shortly after.

Skills revolve around a classless system that makes use of skills tree that branches out for physical, weapons, and survival traits. Some may be taking less damage or having stamina depletion lower. You unlock said skills by killing zombies that give 5 experience each. Unlocking the entire tree is no easy feat since that experience is a drop in the bucket. But having these traits maxed out and obtaining the “end goal” master trait makes a player pretty overpowered. I’ll make the argument of being too OP. I say this since you shouldn’t be able to take 3 shots from a .50 caliber gun and be able to  *limp* away from it. To make it fair to everyone involved, I say two at the most.

Infestation: Survivor Stories/WarZ in a nutshell is an unpolished game that seems to have never really left the beta phase. Unfortunately, it had a lot of potential it never reached, nor likely will. The negative points rack up with rampant hackers, poor user interaction, lack of development, and refinement based on community feedback being slim. I would have to say this game isn’t worth its weight in price. Not to mention the community is on the decline, whether a majority were hackers, or if the players woke up to realize the game is trash. If you want a good zombie survival game, look at DayZ down the road or be on the lookout for others such as H1Z1 which look to be a lot more promising. The only thing that made this game not completely fall flat is the strategic elements with multiplayer. I would call this the opposite of a single player game. If for some strange reason you were to play, I wouldn’t drop more than the Steam sale price of roughly ~$5 USD that I’ve seen it for a small handful of times. Even then, you may be able to find guest passes even cheaper in the right places.