It’s a new year, with new vibes and most importantly new masks. The party hard California-based rap-rock group Hollywood Undead have released their fourth studio album titled ‘Day of the Dead’. This release comes just barely two years after their third studio album ‘Notes from the Underground’. Timing is consistent with the past with their palatable 2-3 year intervals. They have recently kicked around the idea for EP’s releases in between studio albums, but only time will tell if it holds true.

Day of the Dead breaks dawn with ‘Usual Suspects’ as the introductory track. Right from the talk-box-ish intro and the wild beat you know you dove into something crazy head first. This makes you feel “so alive” with the undeniably all-out high-energy that might just make you think you”lost your mind”. Just don’t lose your head, at least yet… I’d go as far to say it’s the most reminiscent of ‘No.5’, but with an angrier Johnny 3. ‘Usual Suspects’ is a solid foundation track to bring the dead back to life.

Rolling along into the second track ‘How We Roll’ we see the West Coast gangster rap influence shining through. From packing heat to sipping Big Gulps, and ghost riding the whip — this is their life rolled up into 4 minutes and 45 seconds. Again, they hit it home with a really fitting instrumental that does nothing but compliment the artistic styles of the crew.

Here on out we pretty much start rolling into the familiar cookie-cutter template from track-to-track as seen on previous albums. Throughout, frontman Danny is consistently grinding through a cliche chorus. Not all are dreadful, or completely awful, but it’s definitely familiar. Most of the instrumentals are also along the same lines being a hit or a miss. With songs like ‘Does Everybody In The World Have To Die’, background noises such as beeping instantly puts an otherwise enjoyable song into the trash pile. Oh, did I mention Johnny 3 could get sponsored by Angry Orchard with how pissed off he is? Then there’s good ol’ Charlie Scene flexing his ever evolving lyricism muscles that make Day of the Dead worthwhile.

Winding down to track #10, ‘Party By Myself’ is primarily Funny Man spitting verses seemingly ghost written by Miley Cyrus over a teen pop instrumental. Not even the legendary Charles P. Scene or the intermittent Workaholics reference to “get weird” could salvage the track. Maybe HU truly doesn’t give a hoot, but this isn’t them. In fact, I consider this on the completely opposite end of the spectrum of their roots. Evolution is good in the music scene, but attempting to be something your not is obvious and a disservice to the true fans.

At the end of the day (of the dead), we get put down like Walt Disney’s Old Yeller with the outro track ‘Save Me’. It’s a painfully slow journey on an emotional roller coaster of love. It’s pretty cutthroat for the end of the Day of the Dead album. However, the bonus material on the deluxe edition does bring some damn good content to the table. Songs like ‘Guzzle, Guzzle’ are the equivalent of Bottle and Gun 2.0. Then ‘I’ll Be There’ with Charlie doing the chorus are an absolute achievement for their new style.

Hollywood Undead - Day of the Dead 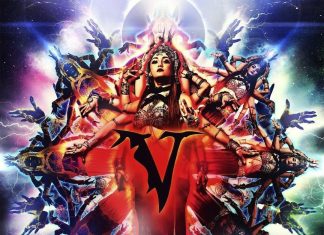