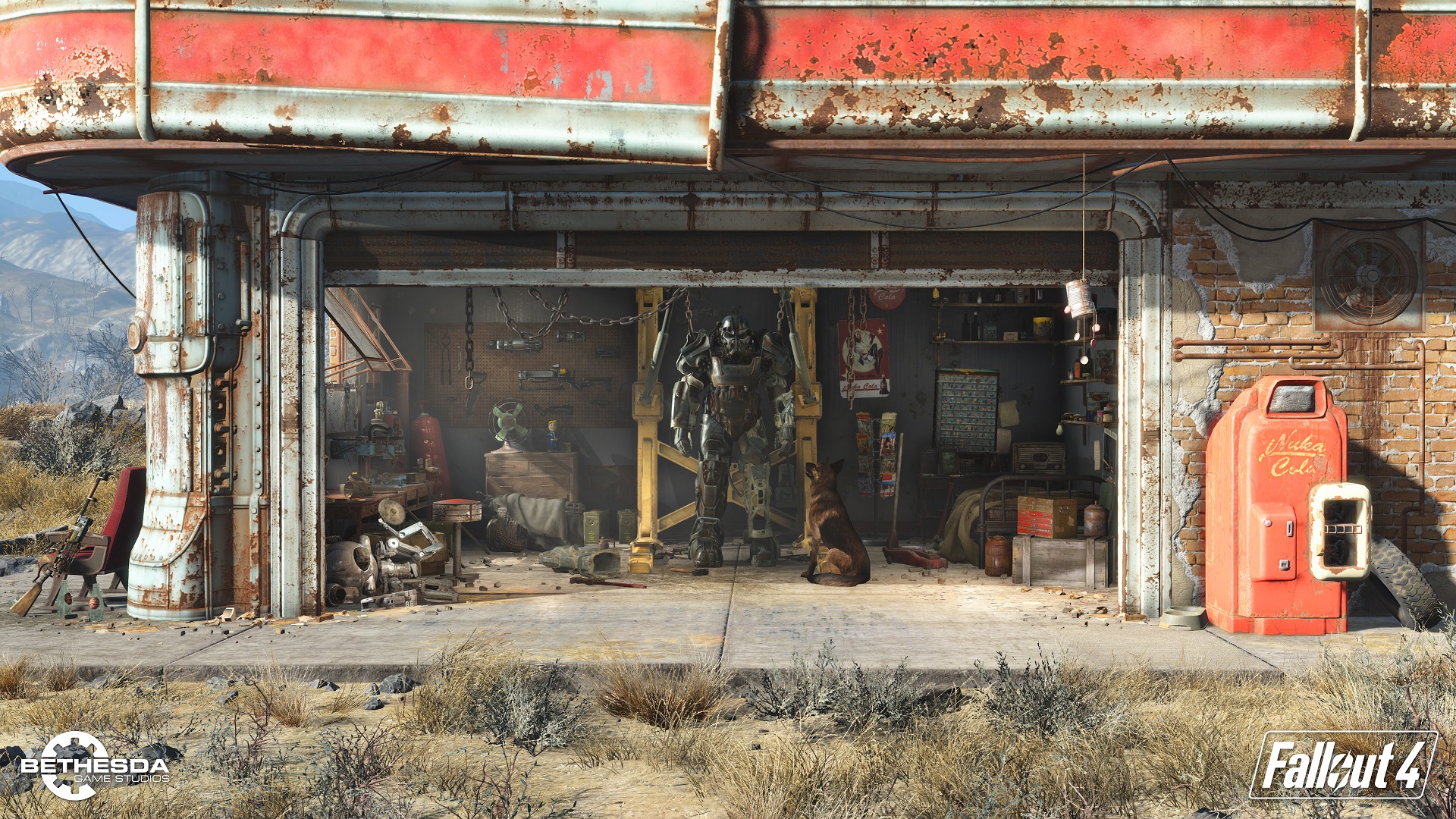 Fallout. Good ol’ Fallout. As a wise man once said, “there’s no falling out from Fallout.” At least, that’s what Mama Murphy told me she heard before twitching in her brahmin hide covered chair and releasing her clenched jet. We all know Mama Murph’s is pretty darn accurate when she’s in her zone.

Now let’s get this supply line on its way to review town!

Fallout 4 takes place throughout various sections of Boston dubbed “The Commonwealth.” From The Green Monster aka Fenway Park to the Old North Church where Paul Revere started his infamous ride, there’s a lot of history from the past, and now hundreds of years later, it’s still in the making.

While the map size is not as vast as say Grand Theft Auto 5, I think it fits the game well for the amount of story. In comparison, Fallout 4 doesn’t have as vast areas of empty desert, or farm fields, but rather intricate areas laced with layers of content. Thanks to features like fast travel, moving about the map becomes a cinch, not a new challenge to the player. Although, it can pose threats if the player becomes careless. The takeaway is that Bethesda gave a great deal of attention to the small details throughout the Fallout 4 map, something you’ll notice right away.

Starting out, your adventure initially begins on October 23, 2077 — a date that some of you familiar with the franchise may recognize as the day the nuclear bombs drop as part of WW3. The story then later picks up and continues ten years after Fallout 3 in the year 2287.

A few cut-scenes in and you’ll realize your first steps into the Commonwealth aren’t as a fresh-faced youngling like in Fallout 3; rather you’re a bit more grown. Mature enough to be doing adult-like things such as owning a house and being married. Yep, not to spoil the goods, but you are hitched. This means not only will you be creating your character, but also your lovely spouse. It’s completely up to you, and they can be the love-interest you’ve always dreamed about or merely a Caitlyn Jenner incarnate. Maybe they just happen to be one in the same. I won’t judge.

I’ll give credit where credit is due and hand it to Bethesda here as creating both halves of a married couple in a single-player RPG is a concept you don’t generally do. I would say this is a unique experience right out of the gate, and it stands out. But there’s definitely a reason for this as the makeup of the two characters will affect the genetics of the baby you (if female) or your wife have already pushed out. Again, a concept Bethesda did a pretty bang-up job at doing, in my opinion.

While creating those characters, you will be interacting with Fallout‘s character creation tool. The system is one I’d consider intuitively in-depth while striking a decent balance between decent presets and the ability to make fine tune adjustments via the sculpting feature. From face shape to facial hair, right down to blemishes, you can get a character looking like what you imagined.

Once you are out and about, the NPC’s that you run into throughout the game provide endless banter, which is sometimes pretty amusing. It adds a new dynamic to the game when running by and hearing people having a conversation, or sometimes even arguing. However, some of these characters lack some development. One guy may have a full name with a complete background of who he is, and what his goals may be. While someone else may only be labeled as a “settler”. These settlers lack dialogue as well; they only want to trade and do laborious work. Bethesda could have expanded upon these characters a lot more.

There are some other fallbacks within Fallout 4. My biggest gripe is how short the main story quest line is. You could honestly grind that out in a few hours if you were truly dedicated to just accomplishing that task. Luckily for the typical player, the game doesn’t stop there as there are four factions that each entail lengthy quest lines. This is of course on top of many odd jobs throughout Fallout 4 to occupy your time, such as the seemingly endless task of maintaining 30 or so settlements.

As with most Bethesda titles, some minor bugs are missed, so remember to save frequently. The worst one personally was a lockup of sorts when using an access terminal. Thankfully a roll-back and a few graphical tweaks saved the day.

Some die-hard fans may argue on how early you get the power armor. I feel it plays in pretty well, but sure, they could have allowed access to it a few quests later and stretched it out. On a positive note, this does get players hooked early, which helps keeps interest for some. For those who disagree and say it provides too much of an ez-mode, then I say they are always free to hop out and play without it. There’s also the necessity of obtaining fusion cores to fuel the power armor, which early on is a challenge in itself due to access to only basic weaponry, limited perks, etc.

Visually as far as Fallout 4 is concerned, the game isn’t anything ridiculously groundbreaking. In fact, it’s using a modified Creation Engine from 2011 that was used to power Skyrim. Some textures seem a bit dull here or there, and I don’t consider the water to be that great. For me, this didn’t hamper my overall experience so much so that I wanted to stop playing. If this is a shortcut Bethesda had to take not to add potentially years to the release, then so be it. If you’re not in the same boat as myself and want some eye candy, then I’m sure some mods are floating around that may satisfy.

As a former resident in Vault 111, I have to say this is a game I savored, even if there were some quirks. My final words are to dust off that pip-boy, attempt to crack a Nuka Cola Quantum, and Ad Victoriam! #WelcomeHome

0
2018 has been a great year, thus far, regarding movie releases.  We’ve seen incredible sequels with Avengers: Infinity War and Deadpool 2.  And we’ve...