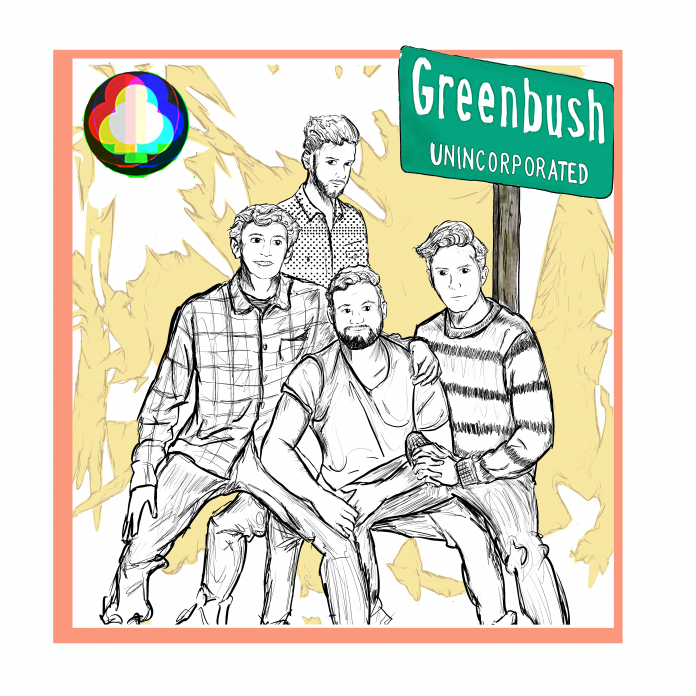 Sheboygan, WI. natives Cold Soda Club are barely scratching the surface on their potential. Formed in 2011 while the members were still in high school, they’ve managed to navigate a difficult musical long-distance relationship with the four members spread out across the state. Two members attend UW-Oshkosh, making the city a staple for their energetic live performances. The current lineup wasn’t solidified until 2015, and within the past year the band even managed to endure through the loss of a second guitarist/keyboardist.

They’re going on just about seven years together, and it’s only natural that much would change in that timeframe. It’s fitting then that their new EP is titled “Passing Greenbush” – though it stands as a bit of an inside joke to the quartet, it symbolically recognizes the coming-of-age the band is experiencing. They’ve been traditionally known for diverse and extended cover sets, but “Passing Greenbush” shows they’re capable of capturing their diverse influences and interjecting their own personalities into the mix.

In many senses, “Passing Greenbush” is radio-friendly. It feels familiar, if not a bit nostalgic. Listeners will find hints of ska, alternative, soul, arena rock, and even a bit of oldies thrown in. It’s an eclectic mix that seems to span decades, though the level of production is decidedly modern. Its five tracks span themes of romance, struggle, and doubt. It’s not groundbreaking in that sense, though it’s certainly suiting of the overall musical direction. Vocalist Tyler Maxon’s soulful timbre only serves to augment these themes.

Feelin’ You wastes no time bursting into full force. Matt Theobald’s bass grooves underlie staccato guitar chords and smooth drumming. Cold Soda Club definitely doesn’t neglect the low end, and the bass thankfully isn’t buried in the mix. Consequently, Feelin’ You has a punch to it. It’s an upbeat, ska-like track and though it’s radio-friendly, it’d be hard to find a recent comparison to use that’s appropriate.

DnD continues the same energy, this time opting for more funk elements. Bass is arguably even more central and technical here. However, it’d be remiss to overlook Trevor Damkot’s guitar stylings – the riffs and chords are executed with rhythmic precision, but it’s arguably the overall tone that pays off here. It’s one of the stronger songs on the EP in terms of balance and energy. The nostalgic elements do surface intermittently but there’s a definite modernity here as well. Overall, it’s another fun track.

The third track, Conquerors, is a personal favorite. It’s explosive and dynamic. Here, Lucas Goebel’s drums really shine. Cymbal crashes are placed carefully for powerful crescendos. Conquerors is heavier than its counterparts, and it carries a lot of force with it: the vocal chorus is passionate, riffs abound, bass is strong as usual, and the culmination of it all is absolutely energizing. Add in a bit of a breakdown and the band has definitely crafted a standout track.

Pineapple takes things down a few notches again. Like most of the EP, it’s a fairly upbeat track mainly centered on a summery guitar rhythm. The surprise solo here is very welcome, adding a bit of flavor into a song that is otherwise fairly circular. It does get a little stale, but there’s enough going on to maintain listener interest.

The EP closes on the bluesy Colors. Guitar is hazy and dark; it’s definitely the most prominent element of the song. Bass is still audible, though it’s certainly more restrained than previous tracks. Colors is a nice counterpart to Conquerors – both tracks show a “darker” side of the band and incorporate more rock elements. Further, Colors slows things down a bit. It’s appropriately moody and technical all at once.

The band plans on releasing a full-length before the year closes, so we can expect much more on the way. In the meantime, we have “Passing Greenbush” to give us a glimpse into what new things might look like. Utimately, the EP could best be described as “promising”. This is the group’s first foray into putting out original music. They’re pulling influences from a multitude of genres and bands. They’re adapting to being a four-piece. They’re navigating the challenges of being in a band while being spread out across the state. They’re undeniably in transition, and there’s nothing wrong with that. The line between variety and inconsistency is easily obfuscated; it can be a bit challenging to tell what was intentional or what was a bit of an experiment. Arguably, it doesn’t matter to the listener. “Passing Greenbush” is not without its flaws, though to a large degree they’re forgivable.

It’s yet to be seen how Cold Soda Club will proceed. Will they mix in more rock and blues elements? Will they lean more toward ska and funk? Perhaps, they’ll maintain an even balance? We can be certain they’ll maintain plenty of energy, strong dynamics, and captivating live performances. Until then, listeners can give “Passing Greenbush” a couple spins to get a good first taste of what the band has to offer.

Peeridium is a different approach to entertainment reviews. We believe a single number by an editor shouldn't represent a work of art. Rather, it should be defined by a great community, starting with you!